Though Branson's experience with the February 29 Branson tornado was minor when compared with last year's tornado in Joplin, damage was extensive to some homes and businesses.  We'll highlight a few of the businesses that were affected and their current and future status. Information has been gathered from multiple sources including the "Branson Tri-Lakes News", the "Branson Independent", explorebranson.com, personal observations or references and individual business websites.

As with many obstacles that we face, some positives can surface and such is the case with Branson. The most evident positive is that there were no serious injuries. The volunteerism and community support for both residential and business has been amazing and uplifting. Beyond that, the renovating and rebuilding may rejuvenate the strip in ways that may not otherwise have been done. There is a positive attitude in Branson for this year and the future. And of course, most of Branson was not affected and business is as usual.

Branson tornado-2012 damage in Downtown-rose on our area map: 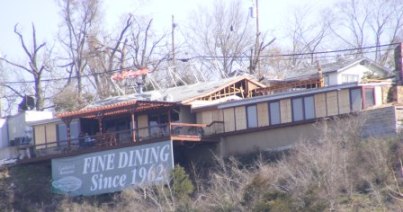 Across the lake on Mt Branson, several homes and the Candlestick Inn were hit. The famous eatery sustained damage to the roof and windows during the Branson tornado. No announcement has yet been made on the re-opening date.

Although the Branson Landing received some damage from the tornado, businesses, workers and other volunteers quickly pulled together for the clean-up. Branson Landing is Open!

Branson Scenic Railway is open. Trains were inspected and found to be sound with no damage.

The Hilton Convention Center and Hotel sustained considerable damage but work is progressing and hopes for opening of the convention center within 30-60 days. The hotel has already started receiving new glass for the windows and renovation of the rooms will begin likely a floor at a time. Most of the planned conventions and meetings for this spring will be relocated at other facilities in Branson.

Historic Downtown Branson was in the line of the tornado but most businesses escaped damage and Downtown was open later the same day.

The area along Main St. and Hwy 76 between Business 65 (Veterans Blvd) Downtown and Roark Road on the other side of Hwy 65 overpass was not hit by the Branson tornado and business is as usual.

The area between Roark Road (just west of the Baymont Inn) and Fall Creek Road (next to Dick Clark's Theater and Dixie Stamped) suffered considerable damage.

The Veterans Museum and some motels and restaurants are open but extensive damage occurred at several other locations along this strip. 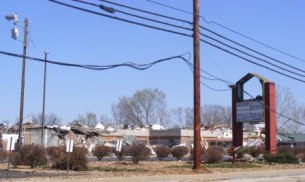 The Branson Heights Shopping Center was destroyed and will likely be rebuilt. In the meantime, some businesses are re-opening in different locations. Duane Gerken, manager of the center expressed the good that came from the storm, commenting in the Branson Tri-Lakes News that the "outpouring of the community has been truly a blessing". He mentioned that he'll always remember the actions of local contractor George Cramer who drove some heavy equipment to the center at 3 AM to help start digging out.

The Branson Auto Museum also sustained considerable damage as did the Ozark Mountain Motel. No word yet on re-opening dates.

Still in the 76 East area but west of Fall Creek Road, damage was non-existent in places and heavy in other locations.

Dick Clark's American Bandstand Theater was hit but is proceeding on renovations with plans to open soon while across the street, the Dixie Stampede was spared any damage from the storm with nary a flower destroyed.

Further west on the strip damage was fairly light except for the area around Wal-Mart and the Branson Mall. Damage in this area included:

Holiday Inn Express-repairs and renovations are under way and should re-open soon. 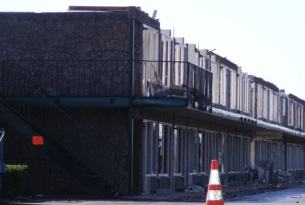 JR's Motel had extensive damage (shown at right) to the top floor. No information of re-opening yet.

Shoney's, Taco Bell, the Burger Shack and TCBY sustained damage and repairs are under way.  The new Burger Shack which opened in February should re-open soon after losing most of a wall from the storm.

Wal-Mart is open but the attached Branson Mall, including the theater and shops had extensive damage and re-opening information has not yet been released. The Jubilee Grocery Store which is also a part of the complex was heavily damaged. Our understanding is that they will begin rebuilding the store with improvements.

A few of the motels on Green Mountain Drive just west of the Jubilee Store sustained damage but repairs are in progress and re-opening will be soon. 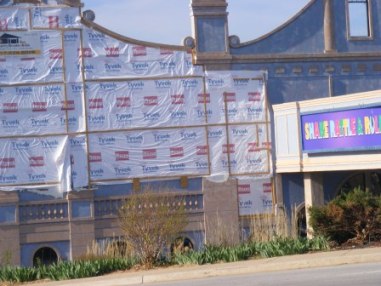 On the strip, the Branson Variety Theater, home of "Hooray for Hollywood, "The Twelve Irish Tenors", "Shake, Rattle & Roll" and "The Songs of the Four Seasons and Beach Boys" suffered damage from the Branson tornado at the south west portion of the Theater and have delayed their opening by 4-8 weeks. While the tornado damage has delayed the start of the season, the positive note is that they will improve the theater and  renovate the appearance at the same time they are rebuilding.

Further west on the north side of the strip, the Hall of Fame Hotel, Charlie's Steak House and the Riverboat Inn all sustained heavy damage. The Riverboat Inn located directly east of the Starlite Theater is likely either closed for much of the season. However, plans are to either completely renovate or tear down and rebuild. No word yet on the Hall of Fame Hotels and Charlie's Steak House. 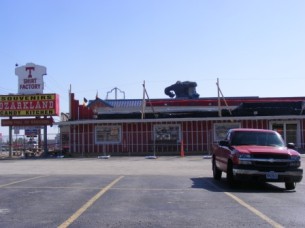 On the south side of the strip heavy damage occurred at both Ozarkland and H&J Gift stores. 2nd floor of Ozarkland is gone.

On the north side of the strip heavy damage occurred at the Ria Motel as well as the office of the Adventure Helicopters and rebuilding plans have not been announced.

The Track Amusement Park is open though extensive damage was done to the arcade building. 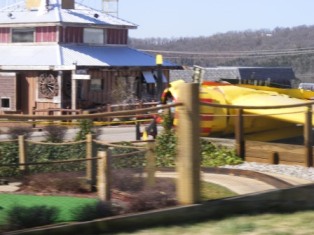 Across the street, Professor Hackers Miniature golf sustained damage. The yellow airplane atop the course is gone but the course will hopefully be open soon.

To the west, the Blue Bayou Motel incurred lots of damage and we have not had word on re-opening of the motel or of Starvin' Marvin's restaurant

We have not listed every business that sustained damage fron the Branson tornado but many of these locations are already open for business or will be soon. We regret the damage that occurred at some businesses, but we again remind you that most of Branson is open and wishing that you would come to see them. The vast majority of the 18,000 rooms in Branson are available for guests and most of the restaurants were unaffected and those that were will be open soon.

Of the 50 theater Venues, only a couple will have to delay their opening and they should not be for long. Most of the golf courses and nearly all of the attractions are in operation today.

Come to Branson and support this beautiful town. Fun is still the word for Branson.

Our condolences and prayers today are for those families that lost friends and loved ones in the storms and tornados that hit the Midwest last night and early this morning as well for all who have been affected by the loss or damage to property.

In Branson we are thankful that minor injuries are all that have been reported thus far. The storm hit between 1:15 and 1:30 AM and moved from the lake town of Kimberling City coming into Branson along Hwy 76 just east of the Jim Stafford Theater. It followed a path along the Hwy 76 strip hop-scotching into the downtown area, across the lake into the community on Mount Branson that overlooks Branson Landing.

Branson tornado-2012 damage is extensive in places with the Branson Variety Theater, Dick Clark's American Bandstand Theater, the Branson Heights shopping center and the Hilton Convention Center Hotel taking hard hits. Power was out most of the day for much of Branson with a few areas looking at likely 3-4 days before being restored.

Cleanup and restoration started immediately and city leaders feel most of the city will be back in business by the time the season gets into full swing. Much of Branson was unaffected by the storm and business is as usual in many places. Most theaters, attractions, motels and hotels will likely open according to planned opening dates if they are not already in operation.

On Table Rock Lake at Kimberling City docks and boats took the first hit. The Kimberling Inn which also had extensive damage had a full house of fisherman in town for a bass tournament. Only minor injuries have been reported.

We will continue to provide information on the Branson tornado-2012 as things develop.